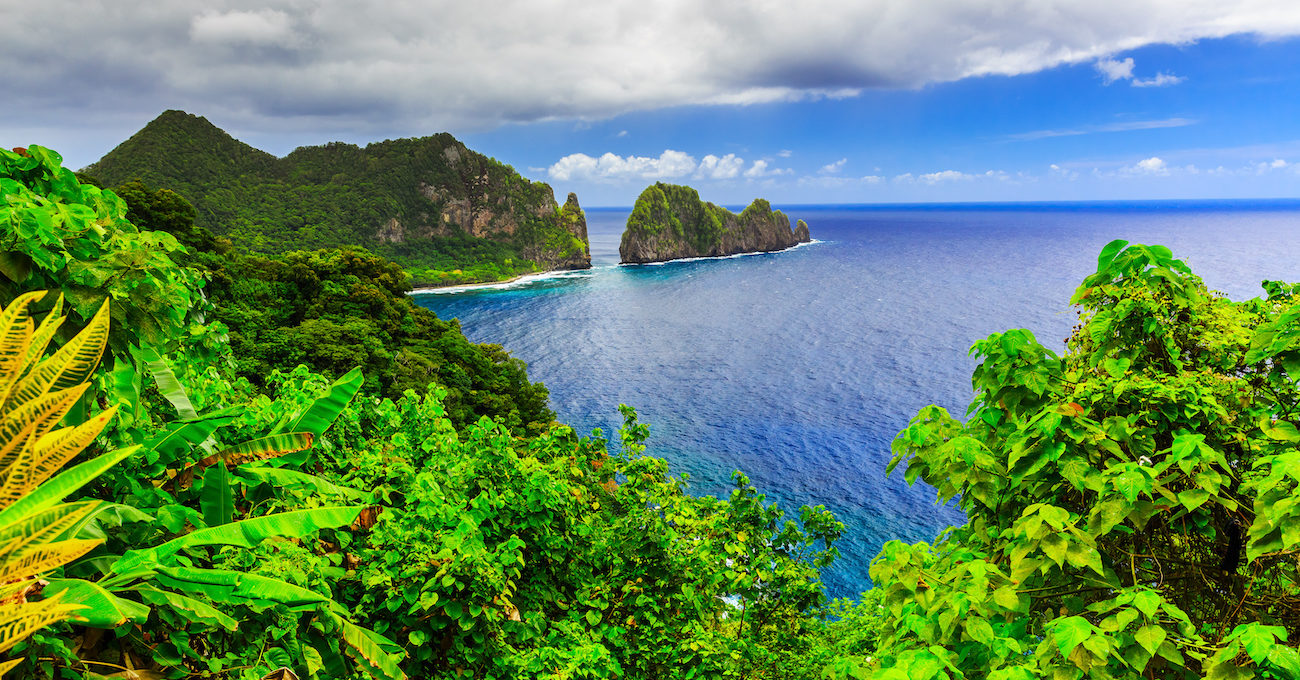 Top Photography Locations and Sights at the National Park of American Samoa:

One of the unique things about visiting the National Park of American Samoa is the opportunity to not only experience the park and all its splendor, but also the culture and customs of the people of American Samoa. In fact, a Homestay Program is available to those visiting these beautiful islands.

“The Homestay Program provides an opportunity for visitors to become acquainted with Samoan people and culture in a village setting. Residents of villages associated with the national park offer accommodations and the opportunity to learn local customs, crafts, and the South Pacific lifestyle. Imagine staying in a village with the sights and sounds of the rainforest around you. Sleep in a Samoan house (fale), live with a Samoan family and start the day participating in village activities. Some may be familiar. Others, like cutting the pandanus (laufala) tree leaves and drying them to weave mats, may not.”

National Park of American Samoa is filled with wildlife and biodiversity. If you like wildlife photography, you will love what this park has to offer!

Top Photography Locations and Sights at the National Park of American Samoa:

Pola Island Trail, located on the Tutuila Island, is a short, fairly flat trail that leads to a rough and rocky beach with views of the coastline and Pola Island. | Distance: 0.1 mi / 0.2 km roundtrip | Note: Due to unfriendly dogs, please drive past the last house at the end of the paved road in Vatia Village. Source: NPS

The Lower Sauma Ridge Trail is located on the Tutuila Island. This interpretive trail takes you to Samoan archeological sites. Along the trail are exhibits and spectacular views of the northeast coastline of the island and the Vai’ava Strait National Natural Landmark. Visible looking north is the tall and skinny Pola Island, a nesting area for seabirds. | Distance: 0.4 mi / 0.6 km roundtrip | Source: NPS

The Fagatele Bay Trail is located on Tutuila Island. This trail is located outside of the national park, on private land, provides access to the National Marine Sanctuary of American Samoa. Turtles, whales, sharks, and giant clams all find refuge in this protected area. | Distance: 1 mi / 1.6 km roundtrip | Travel west on Route 001 to Futiga Village and turn left just before the US Mart. Follow the road past the landfill until you reach a locked gate. Ask for permission from the family at the end of the road to hike past the gate. The family might charge a fee. Follow the trail to a small
beach. For more information call 684-633-5155. Source: NPS

The Tuafanua Trail is located on the Tutuila Island. Hike up switchbacks from Vatia Village through lush tropical rainforest to a hidden coastline. At the ridge-top, enjoy ocean views before a steep descent on several ladders with ropes to a quiet, rocky beach and view of Pola Island. The trailhead can be found just before the Mount ‘Alava Elementary School. This trail
is closed on Sundays. | Distance: 2.2 mi / 3.5 km roundtrip | WARNING: Do not to enter the ocean at the beach due to dangerous waves and currents. Source: NPS

The Blunts Point Trail is located on the Tutuila Island. | Distance: 0.6 mi / 1 km roundtrip | Located between Faga’alu and Utulei on the coast road. Look for the sign next to the IBM Laundromat marking the path to this site. Park at the public parking lot on the harbor side, 100 yards from the trailhead. When the trail reaches the water tank, continue past it on the left. Source: NPS

The Breakers Point Trail is located on the Tutuila Island. | Distance: 0.3 mi / 0.5 km roundtrip | From Pago Pago, drive toward Aua on Route 001. Continue 1.1 miles / 1.8 km past the intersection with Route 006 in Aua to a sign on the left marking the trailhead next to a house. Park at the private house without blocking driveway access. Ask for permission from the house owner to hike the trail. This site is closed on Sundays. Source: NPS

The World War II Heritage Trail is located on the Tutuila Island. Hike past multiple World War II installations that helped protect American Samoa from a Japanese invasion. Also, enjoy the tropical rainforest and listen to native bird songs. Along the last section of the trail, experience
many steep “ladders” or steps with ropes that end where a tramway used to transport visitors to the summit of Mount ‘Alava. | Distance: 1.7 mi / 2.7 km roundtrip | See (6) Blunts Point Trail for directions to the trailhead. After reaching the end of the trail, at the former tramway, continue down the road to where it interesects with another road. Turn right until you reach Route 001. Turn right onto Route 001 to return to the parking lot. Source: NPS

The Mount ‘Alava Trail is located on the Tutuila Island. Enjoy hiking through a tropical Samoan rainforest with fruit bats and many types of birds. Along the trail you’ll see the park’s efforts to remove invasive trees
and plant native species. About halfway up the trail is a banana and coconut plantation. Great views of the northwest side of the island along the way lead you to panoramics of the central areas of Tutuila island. | Distance: 7 mi / 11.3 km roundtrip | The trailhead is located at Fagasā Pass, 1.2 miles from Route 001 in Pago Pago. Source: NPS

The Mount ‘Alava Adventure Trail is located on the Tutuila Island. This challenging loop trail takes you along ridgelines with views of the north and central parts of the national park and island. Hike up and down “ladders” or steps with ropes for balance. There are a total of 56 ladders and 783 steps! The trail leads to the Mount ‘Alava Summit, returning down another steep section of trail to Vatia Village, and loops back along the road
to the trailhead. | Distance: 5.6 mi / 9 km roundtrip | The trail begins across the road from the national park faleo’o and trailhead for the Lower Sauma Ridge Trail. Source: NPS

Birdwatching on the Manu’a Islands is amazing! Manu’a is home to several birds not found on Tutuila—the Blue-crowned Lory, Friendly ground dove, and the elusive Spotless crake. The absence of the invasive Myna bird also makes it easier to observe and enjoy more common native birds like Samoan starlings and Wattled honeyeaters. Source: NPS

The south side of Ta’ū is a volcanic caldera. Steep walls formed when it collapsed. Laufuti Stream flows along an intermediate bench between walls
before its route takes it off the cliffs at the coast. This waterfall is dramatic after heavy rain, but much of the time is just a trickle. Most of the water moves underground and emerges as a perennial spring at the base of the falls where running pools of cool fresh water meet the incoming surf. Source: NPS

The Si’u Point Trail is located on Ta’ū Island (one of the Manu’a Islands). This trail follows an old road in the coastal forest past the culturally important Saua site to the southeast tip of Ta’ū island. | Distance: 5.7 mi / 9.2 km roundtrip | The trailhead is actually a continuation of the main road in Fiti’uta. As you pass the last houses, the road becomes dirt. Source: NPS

The Oge Beach Trail is located on Ofu Island (one of the Manu’a Islands). This trail traverses the shoulder between Mata’ala Ridge and Maga Point, where boobies and frigate birds are often seen. Follow the trail down slope
past Maga Point to emerge at Oge, a remote coral rubble beach that faces Ta’ū. The hike continues as a beach walk to Leala Point. This trail is maintained in partnership with the village of Olosega. | Distance: 2.7 mi / 4.3 km roundtrip | The trailhead starts by the landfill where the Olosega village road ends and continues eastward. Source: NPS

With a secluded sand beach and fringing reef, the Ofu Island unit of the park is an ideal place to snorkel or simply enjoy the solitude. In addition to daytime activities, the evening brings its own charm. Away from major light pollution, enjoy the constellations of the Southern Hemisphere and the clear views of the Milky Way. Source: NPS

The Ofu island unit has a shallow protected reef with a great diversity of coral cover and fish. This is a feast for the eyes in the morning light. Keep an eye out for octopus and sea turtles. Be aware of the location of rip currents (avas) wherever you swim. Source: NPS

While not technically inside the National Park, the Tumu Mountain Trail is recommended by the National Park Service as a location to visit while spending time at American Samoa’s Manu’a Islands. Rated as a “challenging” hike be prepared for stunning views and trails all to yourself! Enjoy tropical rainforest and views from Ofu island’s highest point at 1,621 ft / 494 m. From the top, continue another 0.25 mi / 0.4 km on the new Tumu Mountain Trail extension to a rock outcropping on the Leolo Ridge with stunning views of three Manu’a islands and the coral lagoons in the national park. | Distance: 5.5 mi / 8.9 km roundtrip | This trail starts near the Ofu Harbor and follows an old road to the summit. Source: NPS

Do you want to be featured on National Park Photographer?

Why wait! Contact us today at nationalparkphoto@gmail.com for more information about being featured!

This website uses cookies to improve your experience while you navigate through the website. Out of these, the cookies that are categorized as necessary are stored on your browser as they are essential for the working of basic functionalities of the website. We also use third-party cookies that help us analyze and understand how you use this website. These cookies will be stored in your browser only with your consent. You also have the option to opt-out of these cookies. But opting out of some of these cookies may affect your browsing experience.
Necessary Always Enabled

Any cookies that may not be particularly necessary for the website to function and is used specifically to collect user personal data via analytics, ads, other embedded contents are termed as non-necessary cookies. It is mandatory to procure user consent prior to running these cookies on your website.